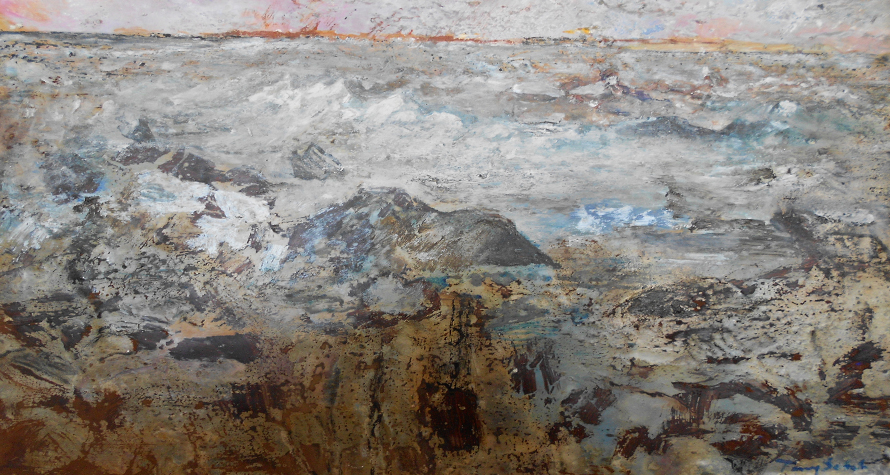 Terry Setch is an important and influential figure in the Welsh art scene, creating much of his work, since the 1980s, in the BayArt / Butetown artists studios building.  Over the course of his six-decade career, Setch has become known for his radical approaches to painting, in which he has synthesized the actions of the body with the experience of the natural environment. Characterized by the fusion of natural and synthetic elements, his paintings have incorporated industrially produced materials and environmental detritus since the 1970s, including resins, microcrystalline wax, polymers, and found plastic objects

A recurrent theme of his work, since 1969, has been the beach landscape found in and around the Penarth coast of South Wales. As well as becoming a second studio for the production of his paintings, the beachscape provided important metaphors for wider contemporary political and social concerns – particularly the devastating impacts of pollution. Martin Holman has described the beach in Setch’s work as being “the Nevil Shute- like emblem of civilisation’s final refuge from nuclear or ecological catastrophe.”  Setch describes his initial connection to the beach as theatrical, referring to it as a ‘playground’ in which he could develop ideas. He initially devised ritualistic performances to imaginatively explore the possibilities of the environment – systematically setting up totem-like structures from rocks and beach detritus and returning to discover where the high tides had deposited the objects in new arrangements along the shore.

For many years, Setch produced his paintings directly on the beach, onto purpose-made tarpaulin sheets, thereby bringing the image closer to the experience of nature. Pursuing his active interest in unity and disunity, order and disruption, he allowed the elemental forces of the beach such as the wind and deteriorating effects of seawater to transform his materials, unifying even the most disparate of objects from wrecked cars to the surrounding rocks. As he has said, “The beach has the power to shape everything it touches into its own image.”