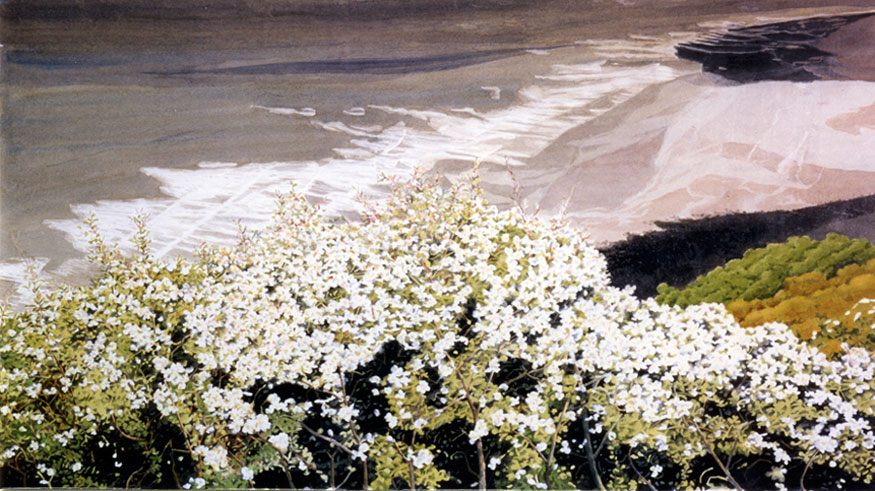 Michael Williams lives and works in Gloucestershire. He has exhibited widely, and was included in ‘The Pursuit of Painting’, Museum of Modern Art, Dublin in 1997. He has had a long association with Wales, living here for 15 years. During this time he was an energetic member of AADW, which was on of the first artist’s organisations in the UK to establish affordable studios for artists. This will be his first solo exhibition in Wales. He is a water colour painter, of still life’s and landscapes. These landscapes alternate between depictions of Somerset and the Agean Island of Paros. They are primarily paintings of the coast which provides, in his words, “The meeting of land and sea…..or the transcendental backdrop that the sea provides for things on the shore that you can know and touch”.

Williams is not one to take advantage of water colours propensity for ambivalence. He avoids that wet, blotter-like seepage and slippage, which can easily facilitate atmosphere, approximation and ambiguity. Rather, he rigorously manipulates the challenges of this medium by accumulating discrete marks to gradually build a unifying structure, (he never uses white pigment as a means of reversal or correction). This involves a balancing act between the surface demands of rhythm, pattern and detail (the known) and the desire to actualize light and space (the transcendent)? Consequently, there is a strong sense of particularity in these works that affirms both substance and fragility.