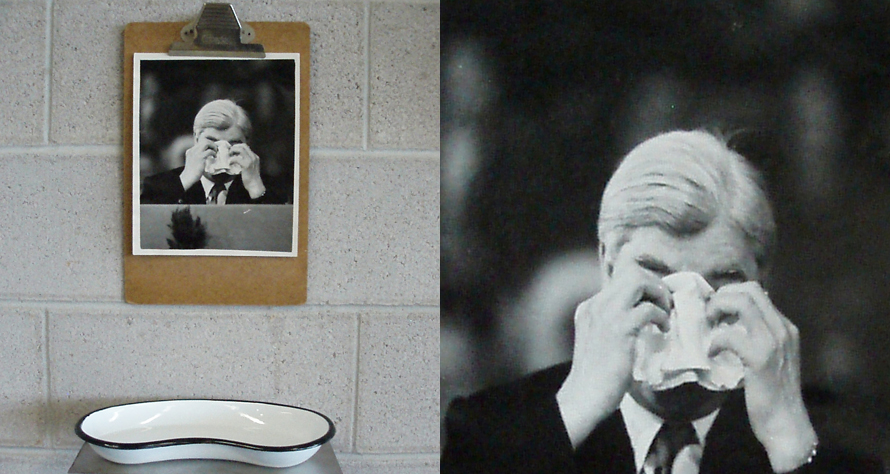 Two artists with very different ideas of intention and practice. But both share an interest in abandoned places or things, in the quality of a used place or object being discarded or deemed useless, or in a place of industrial ‘ghosts’. They also share an extreme and strongly held loyalty to the place they live and work in. This can encompass a historical, psychological and personal attachment to a locus or landscape. Their work reflects this connection. This involves not only a subject but also an attitude towards form.

David is an assembler, who takes disparate objects and conjoins them to make another singular statement. He utilises actual things and objects that often have previous functions or ‘uses’. These are then represented in ways that revives them and gives them other possibilities. These are often political, allegorical or symbolical. But beyond these more explicit meanings there reside other possible interpretations that come from a sense of decay, of dustiness, of being overlooked. Such qualities inherently possess a tenderness that helps to reinforce the main thrust of the works.

Tom, on the other hand, investigates the properties of paint and surface when making his art. His images are found through process, of erasures, of being sanded, eroded and consequently revealed. They are very much embedded within the central concerns of painting.  But he also introduces disparate materials and elements that can rupture the cohesiveness of a painting. He is very interested in industrial places or spaces of abandonment that share some of David’s concerns. But with Tom these are brought into the conventions of pictorial language, so, for example, an old shed can provide both abstract form and individual character.